To support the kba-ccr-2012 task, we assembled a corpus in which every document has a time stamp in the time range from October 2011 through April 2012. This corpus is distributed by NIST (see below).

The corpus has three components:

The corpus is approximately 9TB of 'raw' text, not including 'cleansed' and 'ner'. After XZ compression, it is 1.9TB.

Stats in the table are derived from aggregate-stats.json

The corpus consists of several languages. The boilerpipe cleansed and Stanford NER output was only generated for documents which had a reasonable chance of being English.

The corpus spans the months October 2011 through April 2012. The plot below was generated from all-date-hour-stats.json 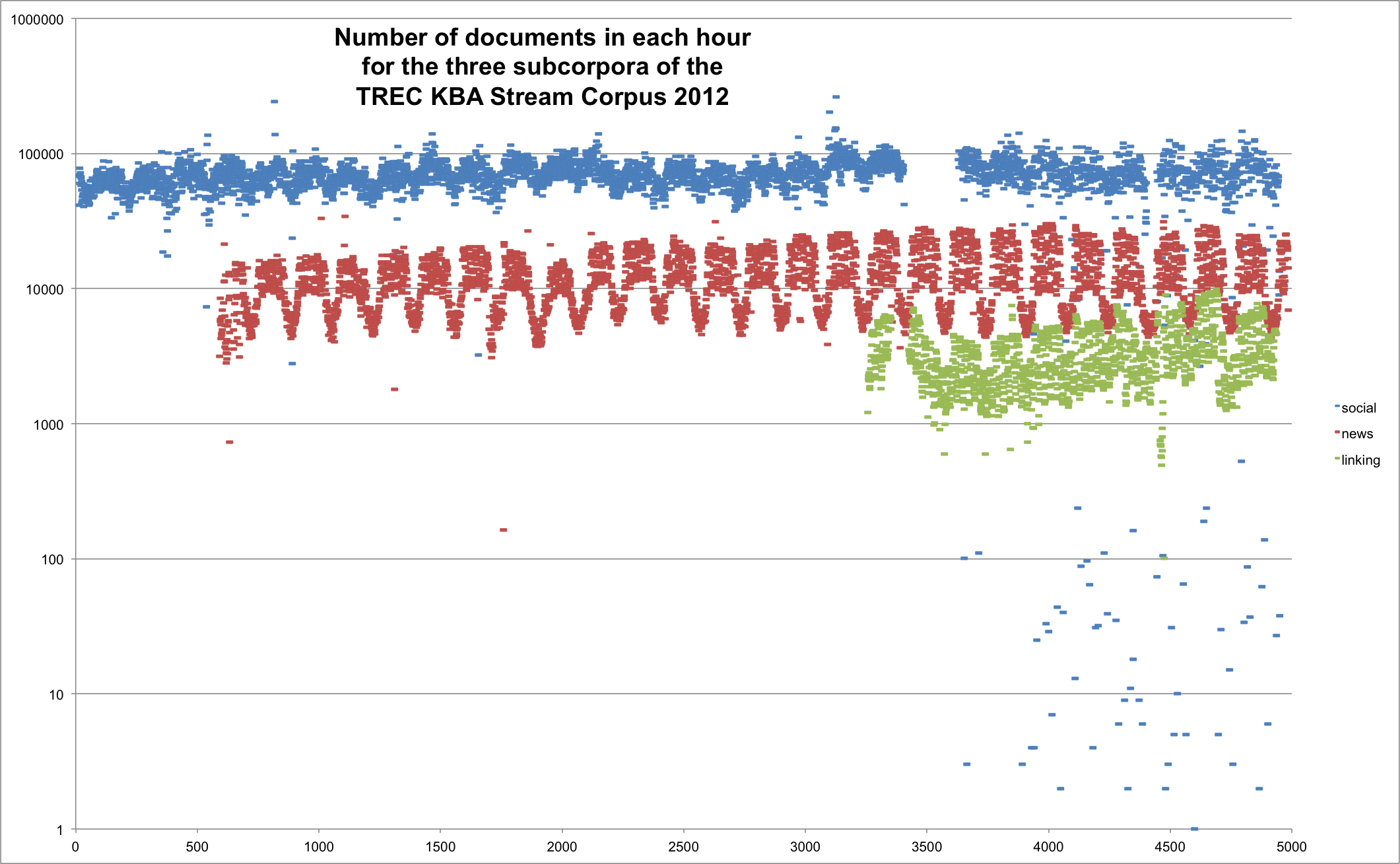 To take full advantage of the cleansed and ner output, one should examine the descriptions of these processing stages in doc.body.stages

The structure of the rows in the NER output is:

The files containing JSON lines are gzipped and stored in a shallow directory hierarchy:

'YYYY-MM-DD-HH' denotes a year-month-day-hour in UTC and 'md5' is the hex representation of the md5 hash of the contents within the gzipped file. The number of stream-item instances per file varies between a few hundred and a few hundred thousand. This directory structure should enable a variety of processing approaches, including multi-step mapreduce jobs with hadoop.

We transformed the corpus from JSON to thrift, which is >10x faster to deserialize and supports binary data, thus allowing us to drop the string-escape encoding hack described below. Our thrift objects are defined in http://trec-kba.org/schemas/v1.0/kba.thrift, which you can use to generate client code in most programming languages. For example, to generate java or python client classes for loading the deserialized data, you can:

You can see thrift in action in two examples:

The corpus is stored in gzip'ed files containing one document per line. Each line is a JSON string containing both metadata and the raw byte array of the text. Generic JSON does not support byte arrays. Instead of using BSON, we chose to string-escape the raw bytes of content so they could be stored in generic JSON.

The documents are stored in JSON objects, so each document and its metadata is serialized on to one line. The corpus consists of files with one JSON object per line. The schema for these JSON objects is http://trec-kba.org/schemas/v1.0/stream-item.json, which you can explore using this JSON schema validator.

All strings in the metadata and instances of content-item are treated as byte arrays and converted to string literals that JSON can handle without Unicode conversion. The particular flavor of string literal used is Python's string literal, i.e. we used String.encode('string-escape') which is the same as repr(my_string). To obtain the original byte array in python, one can:

We are also gathering a corpus of pages cited in the English Wikipedia. These citations were created by real Wikipedians. The corpus can be used for many purposes, including training models. Here is an sample of a few documents that are cited by multiple Wikipedia entities.