This page is an archival record of the second year of the KBA track, which ran in NIST's TREC 2013. See the 2014 task.

KBA 2013 was a great success. See summary of results:

KBA systems must filter a large stream of text to find documents that can help update a knowledge base like Wikipedia. This requires systems to disambiguate entity mentions and filter documents to satisfy particular information needs.

The hourly structure of the KBA stream corpus allows entities to evolve.

Unlike traditional filter topics defined by a list of keyword queries, entities are described by semi-structured articles in a knowledge base (KB) like Wikipedia, Facebook, LinkedIn, Crunchbase, etc. Such KB articles are more human-centric and also provide richer material for modeling.

Systems in KBA 2012 used a variety of approaches. Given the large training set, machine learning approaches that used just words and phrases as features were above the median in CCR. Given the rich structure of links in WP, mining rich features from the KB also performed well. Several teams explored temporality within the CCR context. In KBA 2013, we hope to see combinations of these ideas and new ones.

Timeline leading up to TREC 2013 conference

This repeats the KBA 2012 task with a much richer set of target entities and refined definitions of relevance rating levels. Systems should aim to replicate the "vital" judgment for entire documents, i.e. to propose documents that a human would want to cite in updating the Wikipedia article for the target entity. We have revised the run submission format to allow systems to indicate other relevance rating levels. This makes the run submission format the same as the training data.

Systems must iterate over the hourly directories of data in chronological order, hour by hour. Systems must not go back to promote documents using information from the future. There is no limit on the number of documents that may be included in a run submission.

We are hand-picking a set of ~600 people and organizations from Wikipedia and Twitter. We used several clusters of related entities from small towns and other types of communities. We focused on entities with complex link graphs of relationships with other active entities. For example, Phyllis Lambert.

kba-ccr-2013 has no novelty requirement, so if Justin Bieber were a target entity (he is not) and he happens to produce a new album, and two hundred StreamItems (documents) announce it, then in principle they are all citation worthy -- they all contain information that pertains to building a profile.

The hard part of CCR is modeling the notion of citation worthiness. In 2012, the assessors were instructed to treat the highest relevance rating level (then called "central") as meaning that one would cite the text in the Wikipedia article for the taret entity.

For 2013, we have revised the instructions to the assessors to make a better distinction between two different forms of relevance or citation-worthiness when building a profile:

The NIST assessors were instructed to approach each entity as though they were building a profile or dossier about that entity. Since some entities are in Wikipedia, the assessors mental model of a profile should look like a completed Wikipedia article. Other entities are less well known, and might not meet the notoriety requirements of Wikipedia -- in these cases, the NIST assessors were instructed to consider a profile appropriate for the entity, such as a Freebase article. The profile and its content should match the entity.

Using a high-recall (low-precision) system based on name matching, we fed a subset of the corpus to NIST annotators to judge. Participants' systems will probably find some true positive results that we did not send to the annotators in the original annotation effort. See interannotator agreement and recall scores for KBA 2012.

All of the filter topics and annotations from the beginning of the stream will be available to all teams at the start of the evaluation.

The entities are specified by their "target_id" URL in either Wikipedia or in twitter.

It is possible for a document to be citation worthy for multiple target entities.

As with KBA 2012, CCR is justed pre-hoc, and provide all the annotation for an early portion of the stream corpus as training data for all the pariticpants in TREC 2013.

Only those documents that have 'clean_visible' text are candidates for the task. Other documents will not be judged, although they may be included in the truth data if the timestamp, URL, and/or string matching against other fields indicate that they contain the same content. Further, the NIST Assessors were instructed to discard any documents that were not primarily English.

The letters asdfzxcv are keystrokes for rapid entry.

SSF builds on CCR by specifying a slot name for each entity. The slot names will come from a fixed inventory based on the TAC KBP 2013 ontology. We will pick interesting slots that change regularly, e.g. the next location that a musician will perform or the sender/receiver of financial transactions involving the target entity.

The SSF query entities will be the same as CCR plus collections of these entities --- we may define additional group-like entities that emerge as cohesive named entities from the CCR targets.

The ground truth data generated post-hoc by judging pooled results from teams will be structured as a timeline of acceptable slot values for each hour. The slot values will be defined by equivalence classes of strings from the corpus that answer the question. For example, (James_McCartney, founderOf, Beatles2) where founderOf is the slot name and Beatles2 points to a set of equivalent strings, such as "The Beatles - The Next Generation" and "The Beatles II".

The run submission format and details of the metric for SSF is under development. It will favor systems that most closely match the changes in the ground truth timeline of slot values. This will probably require that the run submission format distinguish when a system is asserting the appearance of a new equivalence class of values.

We will probably require that systems produce only one slot value per hour per entity.

For example, an SSF system should catch the first appearance of the new information that James McCartney might start a new band called Beatles 2 -- The Next Generation, which the sons of each of the original Beatles' members, who each happen to play his father's instrument. A good SSF system will figure out that the subsequent echo is redundant: 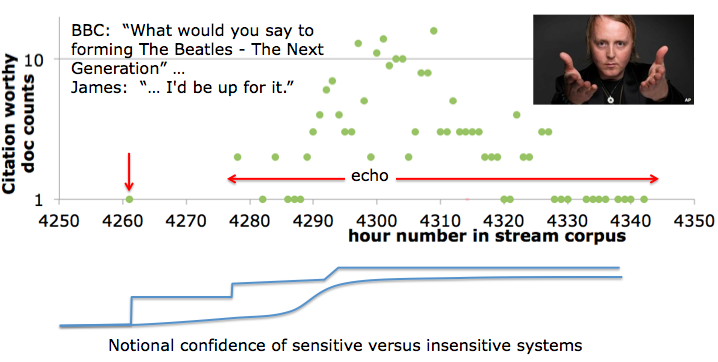 Examples of redudant texts in this echo are: COREFerence resolution, EQUIVilance, RELation, NOVelty

All of these are examples of detecting REDUNDANCY:

Doc 2) UPDATE: James McCartney has clarified his comments on his Facebook page: Hi Everyone...well, looks like quite some attention being given to my BBC interview! Honestly, I was just thinking out loud about playing with Beatles family friends, nothing more. My band’s going to be on tour in the UK and US for most of this year, and the shows are going great! I'm so grateful…Lots of love to you all...!

Doc 3) It is 42 years since the world's most famous band broke up, following an acrimonious split between former best friends Paul McCartney and John Lennon. Now, however, Sir Paul’s only son James has revealed a new group featuring the offspring of the Fab Four could become a reality. James -- who was last night due to follow in The Beatles’ footsteps by playing the Cavern Club in Liverpool ...

Metrics: The primary metric for KBA CCR is maximum macro-averaged F_1 measure. F_1 is a function of confidence cutoff. By sweeping the cutoff, we obtain a range of precision (P) & recall (R) scores for each target entity. After averaging P and R across the set of target queries, we then compute F_1 at each confidence threshold and take the maximum F_1 as the single score for the system. The SSF metric will be as similar as possible.

We are also interested in ranking measures and temporally oriented measures, and may add other secondary metrics.

External Information: teams can use external info that entered the world before the given hour being processed. Teams must describe such external data in their run submission descriptions.

The KBP organizers will endeavor to use top scoring KBA runs submitted by the Regular Deadline as input corpora to KBP Cold Start.

If feasible, KBX will evaluate end-to-end performance of combining KBA+KBX algorithms that filter a stream of ~109 documents and emit a knowledge base about a specific group of related entities.

Note: KBX is an experiment. It might get snarled up in a few ways: the KBA runs might not have enough "small town" entities and TAC-style relations to meet Cold Start's needs, or it might have so many documents that it exceeds the KBP assessor budget. Also, we are still structuring its scientific questions and metrics.

That said, neat things often appear at interfaces, so we feel compelled to try. If you feel similarly compelled, then submit KBA CCR runs by the Regular Deadline in June.

Coping with the Big Data

While the corpus is large, each individual hour is only 10^5 docs. Teams have exploited this in several ways, including:

Submissions to KBA are gzipped text files in the format below. The first line must be a comment containing a JSON string in the filter-run.json schema. Assertions consist of seven fields with separated by whitespace.

Be sure your file name ends with ".gz".

In order to attend the TREC conference, you must submit a run. To send your CCR runs to NIST, verify its format using the scripts that will be provided by NIST. Last years verification scripts are here: http://trec.nist.gov/act_part/scripts/13.scripts/check_kba.pl before uploading to https://ir.nist.gov/trecsubmit/kba.html

Example run submission generated by this toy KBA system written in python that generates both SSF and CCR example output.

Each entity is one of these three types:

The entity_type determines the target slots to fill:

We want to hear about your insights, and please consider describing your work in a poster at the TREC conference and/or a technical report in the TREC proceedings.